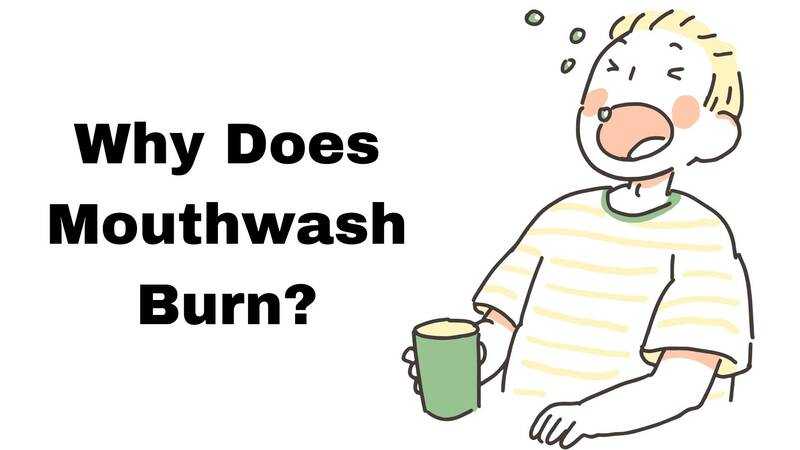 Mouthwash is also considered an oral rinse, a liquid-based product for dental hygiene, cleaning your mouth, invigorating your breath, and killing bacteria on your tongue and between your teeth. So, let us now learn why does mouthwash burn!

Several types of mouthwash advertise the tingling sensations as a sign of the product working properly. Unfortunately, for several people, using mouthwash will not feel refreshing as it gives the sensation of pain and burns.

You can easily use the oral rinse products as directed and still feel the pain and burning sensations while it is in your mouth. So it would not mean that you did something adverse or have to stop using it in several cases.

So, why does mouthwash burn so bad? Today, we will be going through various reasons behind mouthwash-causing burning sensations and what you can do in this regard.

Why does alcohol-based mouthwash burn?

Alcohol consists of antiseptic properties, and it is the primary ingredient in several formulas for oral rinse. It will kill bacteria for sanitizing your mouth, and pure alcohol is not sufficient to kill the harmful bacteria leading to gingivitis and bad breath.

Alcohol is the active ingredient present in mouthwash, and other ingredients included here are menthol. There are a few mouthwash formulas that contain over 25 percent of alcohol.

You will notice that the burning sensation is centralized to your tongue when you place an oral rinse in your mouth. Your taste buds would be quite sensitive to the taste and feel of alcohol and the other areas in the mouth located on your tongue.

What is present in a Mouthwash? 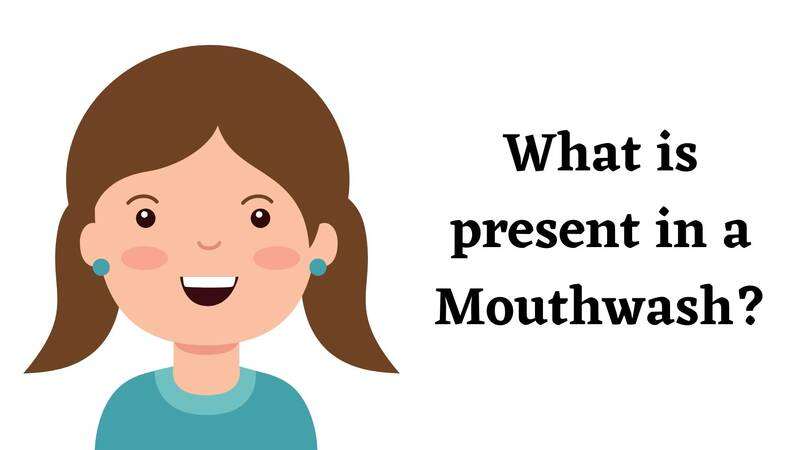 The ingredients present in the mouthwash vary considerably based on the product and the kind of mouthwash you are using, as noted by the American Dental Association or ADA. It divides the mouthwashes into two distinctive categories: mainly therapeutic and cosmetic.

Why does mouthwash burn my tongue?

These active ingredients in the mouthwash are included to meet a purpose as everyone has a specific job to perform. The following are a few of the ingredients that you may find in the therapeutic mouthwash according to the FDA:

Cetylpyridinium chloride: The ingredients can help improve bad breath and have antimicrobial properties to help reduce plaque in the mouth.

Chlorhexidine: It will improve the health of the gum by controlling gingivitis. You will not be able to purchase a mouthwash with chlorhexidine from physical stores; therefore, a dentist will be prescribing it to you.

Essential oils: These will improve the health of the gum by controlling gingivitis.

Fluoride is often added to the mouthwash to prevent cavities or dental decay.

Peroxide: The ingredient will also help in whitening teeth.

Check out the label on your mouthwash to check the active ingredients included here. Additionally, these are the ingredients where several kinds of mouthwash contain alcohol.

Other reasons why mouthwash may burn

So, is mouthwash supposed to burn? You can be sensitive to one of the other active ingredients in your oral rinses if you can switch to a mouthwash that does not contain alcohol, as you can still experience burning sensations.

Chlorhexidine is the most prominent ingredient in the mouthwash that will reduce plaque and help fight gingivitis, along with cetylpyridinium chloride, which can help kid the bacteria that causes bad breath. FDA has also documented the severe but rare allergies that a few people might have to use chlorhexidine.

Mouthwash is also supposed to get your teeth whitened as it contains hydrogen peroxide. Peppermint oil, thyme oil, and eucalyptus oil are included in the mouthwash for refreshing your breath. However, these ingredients will cause oral rinse to offer you burning sensations as you can use it.

A few people are pretty sensitive to menthol derived from mint or peppermint and experience severe burning instead of the comfortable tingling while using it.

Will all the mouthwash burn? 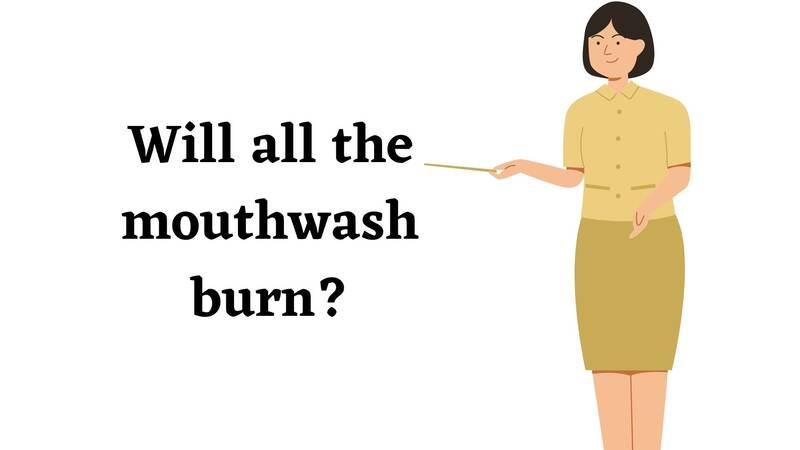 The mouthwashes will cause the burning, but your sensitivity level to varied ingredients would make it difficult to discover the one that will not create any burning symptoms.

Alcohol is not a required ingredient for an effective mouthwash to kill bacteria. A few oral rinses are made without any alcohol that can be gentler on your mouth, gums, and tongues. Several prominent mouthwash brands are making the mouthwash without alcohol.

Menthol is not the required ingredient in mouthwash. The oral rinses that are mint-free, menthol-free, or flavorless are quite available and sold wherever you are specifically buying your mouthwash. Therefore, you may require to try out various formulas before you come across an oral rinse that you would like.

There are various reasons why making mouthwash a regular part of your daily regime is a great idea. There are varied types of mouthwash offering several benefits that can be quite helpful if you try addressing a specific feature of your oral hygiene.

It helps to whiten your teeth.

The mouthwash formulation responsible for whitening your teeth often contains bleaching or whitening agents such as hydrogen peroxide. A few formulas may even contain an alternative, such as coconut oil or charcoal.

Oral rinses make your teeth resistant to cavities that mainly consist of fluoride.

It helps to ward off gum diseases.

The formula or mouthwash is responsible for fighting bacteria that cause plaque and gingivitis, mainly consisting of essential oils like eucalyptol, thymol, or menthol.

Mouthwash can banish bad breath, and formulas that target bad breath kill the bacteria that cause halitosis. This type of oral rinse is typically alcohol-based, but alternatives are available.

It helps to eradicate bad breath.

Some formulas mainly target bad breath by killing bacteria that cause halitosis. It is the kind of oral rinse primarily based on alcohol, and it has its alternatives.

You will also get hold of the therapeutic mouthwash formulations that are only available with a valid prescription. It is at times responsible for fighting gingivitis and treating its symptoms.

Only when mouthwash is used safely can it be beneficial according to the directions present in the packages.

Mouthwash is supposed to rinse your mouth out, so you should never be ingesting or swallowing it. Always call your physician or poison control hotline if you have consumed more than two servings of mouthwash. It contains ethanol or fluoride, which is hazardous to health.

If your mouthwash causes discomfort or burning sensations, you should permanently discontinue its use. Children younger than six years of age should not be using mouthwash.

What Should You Do if Mouthwash Irritates Your Mouth? 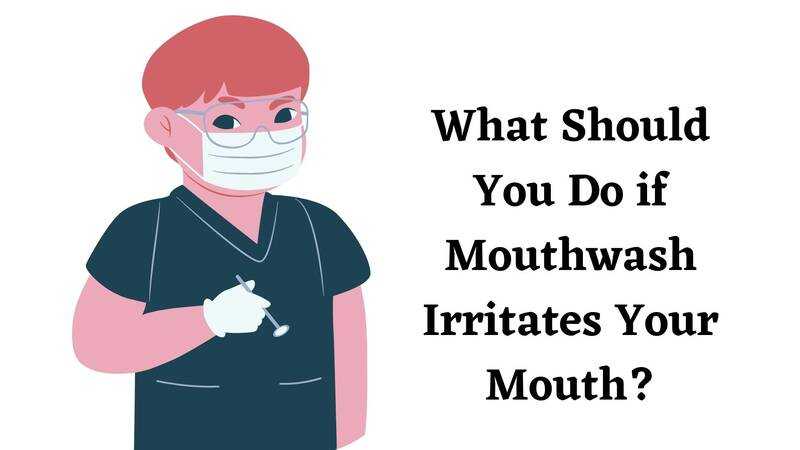 You can try out things if you think your mouth is burning due to an ingredient present in the mouthwash, while it is a drag when something that should be helping you causes discomfort. Let your dentist know if you are using a mouthwash with chlorhexidine. They would be changing the mouthwash with an over-the-counter product to you or trying some other course of treatment.

You may also have noticed a burning sensation in your mouth if you are using an over-the-counter mouthwash containing alcohol, and the best idea would be to speak with your dentist. They would be examining your gums to rule you out for any other causes. They will also be recommending products to you that may cause minor irritation, such as an alcohol-free wash.

Below we share FAQs related to the question of why does mouthwash burn.

1〉 Why does the mouth burn after the use of mouthwash?

There are a few mouth rinses containing higher levels of alcohol that ranges from 18 to 26 percent. It may generate a burning sensation in the teeth, gums, and cheeks. Burning can also be caused by consistent mouthwash that causes irritations to the tissues in the mouth, leading to sores.

2〉 Why does the tongue burn after the use of mouthwash?

It is usual for mouthwash to burn while you are rinsing your mouth. There are ingredients such as menthol and alcohol that cause these burning sensations are, commonly found in mouthwashes.

3〉 Does the burning mean the product is working?

Contrary to the other popular belief, this burning sensation from an antibacterial mouthwash does not mean that it is working. The burning sensation is caused due to alcohol, menthol, and other essential oils indicating sensitivity to the mouthwash ingredients.

4〉 Will mouthwash irritate your tongue?

The mouthwash consists of alcohol. For instance, it can dry the interior of your mouth, leading to a burning sensation in the tongue, gum tissues, and other areas.

There are a few mouthwash formulations containing over 25 percent of alcohol. You would notice a burning sensation in the central part of your tongue while you place the oral rinse into your mouth.

6〉 Can mouthwash be used before bed?

Mouthwash is not just for freshness in-breath; therapeutic mouth rinses consist of special ingredients that can strengthen the teeth and aid in treating a few oral health conditions. Rinsing with a therapeutic mouthwash before bed can help keep your teeth free from plaques and cavities.

7〉 Can mouthwash be staining teeth?

A few of the mouthwashes may be contributing to staining on a tooth that would get you detracted from the entire look of your smile. The mouthwash contains chlorhexidine gluconate that is marketed for treating gum diseases.

8〉  Do you brush or floss first?

The ideal advice would be to floss before you head out to bed. It makes the best sense since flossing would be dislodging the debris in the hard-to-reach places, leaving them prepared for your toothbrush and toothpaste to get rid of.

9〉 What is the thing you spit out after mouthwash?

A few consumers would notice the blue specks in the sink after they spit out the Crest Pro-Health Rinse refreshing clean mint flavor. The blue dye in the mouthwash will bind the germs in your mouth, making them visible while you spit into the sink.

So, why does mouthwash burn? It is not abnormal for mouthwash to burn your mouth, and it has ingredients such as menthol and alcohol that cause this burning sensation, which is present in the mouthwash. There are several alternative types of mouthwash that you can buy if your mouthwash is painful to use, even though it is not the usual cause for concern.